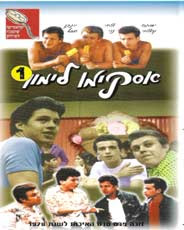 Bobby went to America while Benny and the over weight Johnny stayed in Tel Aviv to seduce girls on the beach. When Bobby returns he gets employed with his friends as a sailor on a yacht that's heading towards Venice. Johnny is annoyed by the sergeant who wants him to marry his daughter, while Benny falls in love with Dana,the daughter of the captain, but she has a relationship with some bully. Some baron is smuggling pearls in Johnny's shoes but he looses them in Venice. Dana in the end chooses Benny.

The 6th part of the shunned "Lemon Popsicle" series is rather clumsy, boring, tasteless, unemotional and overstretched achievement without substance, although he has good music (the one in part 5 was even better) and a few nonchalantly amusing jokes. A few of the solid humor appears in the exposition; a bra equipped with electric shocks for self defence, a postcard containing a woman whose dress can be removed, a parrot warning his owner whenever his daughter is about to have intercourse with someone, the scene in which Benny in a speeding car tears a girls dress. But the majority of the plot is cheap trash - this time it's unraveling on the yacht - and the erotic touch is sustained. In one of the totally confusing scenes the heroes are in a screening room watching how they kissed with Stella (the scene from the first film) although nobody filmmed them back then! As the critics have noticed, the "Lemon Popsicle" series became weaker and weaker with every new sequel, forcing writers to desperately fill the story with nonsense in order to artificially keep it going. Maybe they should have written something new and creative instead of just doing the same old thing again and again.