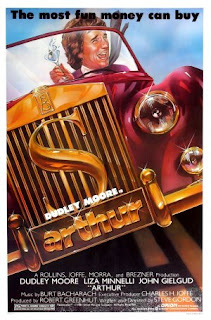 New York. Arthur Bach is a cheerful millionaire whose life consists of being drunk and hanging around with prostitutes. But behind that cheerful life he is hiding his lonely side and is searching for a woman to love. His older butler Hobson is ironically his only true friend. His aunt Martha promised him to keep his fortune, but under one condition; that he marries Susan, a daughter of the influential tycoon Burt Johnson, who has fallen in love with him. Although Arthur doesn't love Susan, he agrees to marry her. But one day he meets and is fascinated by Linda, a waitress that steals a tie for her dad because she is too poor to afford one, and falls in love with her. When Hobson dies Arthur starts thinking about his life and decides to cancel his wedding with Susan and be with Linda, even if he has to live a poor life. The wedding is canceled and Burt is furious, but Martha changes her mind and still let's Arthur keep his fortune.

"Arthur" is a film with a lot of troubles and flaws, but at the same time it is also a film with a lot of reasons to forget those negative sides and enjoy its distinctive charm and a lot of lovable characters that's hard not to like. Some classic directors, like Bunuel and Pasolini, would have probably been horrified by its story that has sympathy for its upper class title hero, but at its core this is a gentle, romantic, touching and humane humorous drama about the search for real life values, and without a lot of philosophy leaves a strong and serious attitude with unobtrusive messages. "Arthur" isn't laugh out loud funny, but it still contains a lot of amusing jokes. In one scene, Arthur and Linda are in a stable, where horses are kept behind doors with bars, and she mischievously says to one horse; "Don't worry, I talked to the warden, you'll be out in no time". In another, Arthur and the butler Hobson are talking about good old times; "Remember when I was a kid and we were playing hide and seek. I would hide so good you weren't able to find me all day!" - "Did you know I never even looked?" John Gielgud portrays the wise butler Hobson with a unique dignity and charm, undermining his character's strange friendship with his master Arthur who admires him more than his father. When Hobson is starting dying and leaving his life, Arthur finds a new friend in Linda and falls in love with her, but the forced happy ending is rather unrealistic. Christopher Cross' song "Best That You Can Do" is simply perfect, twice as better than the film itself, but it still helps pulling it to the better position in the viewer's opinion.