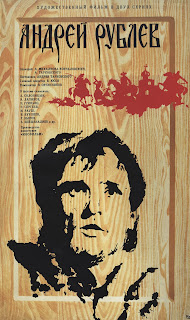 Russia, 1400. During a siege of a church some Efim manages to escape in a balloon, but eventually crashes on the ground. Monks Andrey Rublyov, Danil and Kirill are traveling through the country when they are suddenly surprised by heavy rain, so they find refuge in a cabin. In Moscow, Theophanes the Greek, a famous dying painter, hires Rublyov to help him paint icons and frescos, which makes the jealous Kirill leave the monks. One night, Rublyov spots a group of naked people at river during "lovemaking night"- they tie him up, but one woman frees him and he escapes. During the painting of the chruch, he doubts if he should scare people by painting the Last Judgemant. Years pass and Tatars attack the town of Vladimir and brutally kill a lot of people; Rublyov and a deaf girl are one of the few survivors. The whole area is hit by a famine. A few years later a young boy, the child of a dead bell master, is ordered to make a huge bell for the prince. The boy succeeds and the bell rings loudly. Still, the boy starts crying because his father never learned him how to make a bell so he improvised the whole time, and Rublyov comforts him.

Strange, bizarre, abstract, endlessly demanding and endlessly ambitious, historical black and white drama "Andrey Roublyov" contains all the elements of director Andrei Tarkovsky's handwriting, but it's still for some reason better than his half successful films "Solaris" and "Stalker". Maybe because of Tarkovsky's larger faithfulness and closeness to the theme. The three hour long film contains a meditative, almost fairytale like atmosphere in the first half with a lot of strange scenes, like the one in which Rublyov is at night observing a group of naked people gathering around a river because it's"lovemaking night". In a way, the film is not about Runblyov's paintings, as much as it's about the world and circumstances that surrounded him when he was making them. Still, the middle part of the film contains an invasion of Tatars that doesn't fit into the story and smashes the magical atmosphere because of it's ferocious brutality; two scenes, the one in which Tatars have set a live cow on fire and the one where they killed a live horse fall under the category of animal cruelty, where Tarkowsy went overboard with his point. From that moment on the whole story becomes bleak and much more serious, making the film a matter of taste. One of the most interesting symbols is the parallel of Rublyov's life with that of Jesus Christ in the context of suffering, where his paintings represent a freedom and can be seen in the end, which is the only part that was filmed in color.