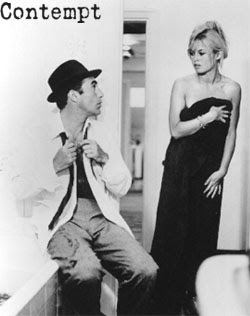 Paul and Camille, a young couple, are lying in their bed. Camille is naked and at one point asks her husband if he likes her body. They later go to a washed up movie studio where Jeremy Prokosch, an angry American producer, is nervous because he invested all his money in the film adaptation of Homer's "Odyssey", directed by Fritz Lang. The three of them attend the test screening of the dailies, but Jeremy is not satisfied with what he sees because he thinks the story looks too mystical. That's why he asks Paul to rewrite the script. Back at home, Paul enters into a huge fight with Camille, even loosing his patience and hitting her. As a consequence, she leaves him. In the end, Paul refuses to rewrite the script, while Camille and Jeremy start an affair and die in an car accident.
Ambitious art drama "Contempt" is Jean-Luc Godard's expression towards the contempt for the movie industry in Hollywood and the commercialism of art, at the same time mirroring his love for movies. As most of his works, "Contempt" is also unusual and extravagant, but it lacks a certain doze of charm and quirkiness. Two scenes stand out from he rest of the film with their sheer brilliance; the inventive opening shot, in which the voice of the narrator is reading the names of this films credits (actors, director, cinematographer...) instead of them being simply presented in titles on the screen, and the closing shot, which shows the sea and the beach, being also at the same time the first scene of the imaginary film "Odyssey". Curiously enough, the American producer is played by Jack Palance who speaks only in English the whole time, and the director Fritz Lang is played by Fritz Lang himself! Still, the two main protagonists are Paul and Camille, a married couple, and their involvement is often boring, monotone and tedious, since Godard was always more interested in style and inventiveness, and almost never in real characters with real emotions, not being adequate enough for a drama. By incorporating the subplot in which Camille is breaking up with Paul to start an affair with the American producer, Godard is probably symbolically talking about the people torn between deep, hermetic art and comercial, but poor fast food entertainment, giving a static and charged meta film essay, but a one that's not that strong enough to intrigue the viewer completely.