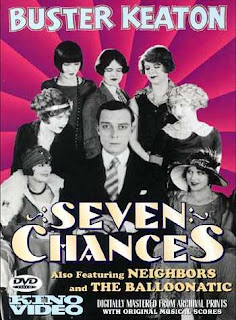 Jimmy Shannon has been in an romantic relationship with Mary for a long time, but never had the time to tell her that he loves her. His job as a broker is extremely unsuccessful, making his business partner Billy stand on the edge of bankruptcy. But one day a lawyer shows up and announces wonderful news to Jimmy; his grandfather, who passed out, left him 7 million $ - but only under the condition that he gets married before his 27th birthday. Jimmy immediately proposes Mary but she ends the relationship thinking he is only interested in money, not in her. Billy convinces him to find a new bride. Soon, Jimmy is proposing every woman he meets, but unsuccessfully. Then Billy prints the news about the 7 million $ inheritance money in the newspaper and the whole church is soon full with brides. Jimmy rejects them all so they start chasing him. When he finds out Mary still likes him, he marries her.

Although it contains a lot of brilliant moments, the silent comedy of misunderstanding and critique of pragmatic/arranged marriage, "Seven Chances", leaves an impression of being vague and inconclusive. Like in, let's say "Go West", this Buster Keaton film also has an intriguing story that wasn't handled absolutely satisfying, but as a light comedy it's still good, superior to the remake "The Bachelor" from the 1990s. The funniest scene is the one in which Billy is persuading the hero Jimmy to propose every woman he meets; by following his idea, Jimmy spontaneously enters a restaurant, sits at a table opposite of some woman and asks her; "Will you marry me?", making every person in the building laugh out loud. Still, some of his attempts are banal (he stops a woman, but when he notices that she is black he gives up!) or simply just nice, making it hard to call them something special. Ironically, Keaton is in best shape when he is starring in a surreal action sequence that doesn't have anything to do with the story and recalls his best virtuous moments from better films like "The General", the one in which he is running down from a cliff, accidentally triggering an avalanche of rocks that start heading towards the hundreds of brides.