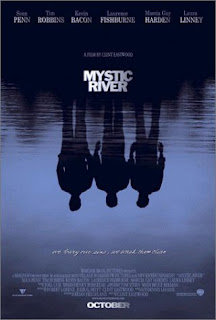 Boston. Dave, Jimmy and Sean were good friends since childhood. While he was a boy, Dave was once kidnapped by child abusers in a car was molested by them, but he managed to get away. Some 30 years later Jimmy is celebrating his younger daughter's firm, only to discover his older daughter Katie has been murdered. Sean, now a police inspector, is worried because the main suspect is Dave, who had bloody hands that night. After a lot of thinking and depression, Jimmy kills Dave because he is convinced he is the murderer. But just then Sean discovers that Katie was killed by two brothers of her boyfriend Brendan, and that Dave actually killed some pedophile who was in his car.

2003 obviously wasn't such a good movie year when a good, but standard drama "Mystic River" won so many awards. This minimalistic drama appeals with a gentle, calm atmosphere, but it can be simply described as - good, but nothing more. Sean Penn and the surprisingly good Kevin Bacon offer excellent roles, although they are sometimes overacting them, and Tim Robbins is also memorable, while a lot of scenes seem realistic (the elaborated scene in which Penn's character Jimmy is leaving the church and following a curious crowd that surrounded a murder site, only to discover his daughter is actually the victim). That's it. Other aspects of the film, like the story or direction, don't have the agility and seem old fashioned, making them more suitable for critics from the kinder garden. The pedophile subplot theme is actually pretty fascinating, but so underused. When Jimmy's wife starts talking her pretentious and wooden monologues ("For your daughters, you're the king...") after he killed his friend mistakenly thinking he is the murderer, the viewer gets the impression the movie turned into a soap opera. "Mystic River" is a good old fashioned film, but there a thousands of equally good films like it, but only a few true masterworks that transcend every convention and norm.