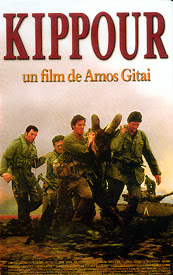 On 6th October '73 Israel is celebrating Yom Kippour. The young Weinraub has intercourse with a girl who is wheeling in painting colors. He then gets mobilized together with his friend Ruso because Syria and Egypt have attacked their country in order to conquer Sinai and the Golan heights. Weinraub and Ruso are driving in an old car, heading to the Golan heights, in order to join their army unit. On their way they pick up an army doctor. In the base they get the assignment to transport the wounded with a helicopter to the hospital. Weinraub has nightmares and doesn't know who is leading in war. When their helicopter gets hit by a rocket they get wounded. Ruso remains in the hospital, Weinraub returns home. Israel wins the war.

Autobiographical war drama "Kippour" is an inspired art film directed by Amos Gitai in a very static, philosophical and demanding way. In the opening shots the main hero Weinraub is walking through the empty and quiet streets of a town. In the next scene, in a huge close up, his arm "dives" into a multicolored layer of colors for painting when a female hand shows up and starts stroking his. As the camera moves slowly away it reveals him and his girlfriend how they are hugging and having intercourse, all splodgy from different rainbow colors; that 3 minutes long, ultra disciplined scene in virtuous, containing a true poetic beauty that has a magical feel to it. Later the story establishes itself as an antonym for the antiwar genre; the enemy (Syria and Egypt) is never shown, while the unpatriotic soldiers are constantly complaining ("I don't want to go into a tank. I have to share that narrow space with four men and I don't have no place to piss!"). The static, extremely long shots of medical help deliberately undermine the action side of the story, turning her one from extroverted into introverted, while the whole atmosphere is very suggestive, making the film note worthy, although he contains some overlong and repetitive moments.