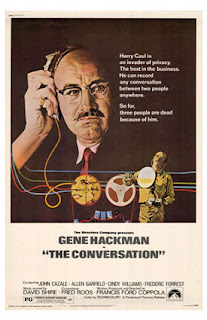 Harry is an expert on surveillance. Together with his colleague Stan he is secretly listening to a conversation of some young couple with a help of hidden microphones. That private assignment was given to him by some industrialist. Harry goes to his firm to hand him over the tapes but when he only finds his assistant he changes his mind and decides to hand it to him personally. After handing out the tapes, he suddenly starts fearing he might be killed because he knows too much. Since the couple mentioned a room number 773, he goes to check it out. Ironically, there the couple kills the industrialist, not the other way around. In the end, Harry is left paranoid and alone in his apartment.

In "The Conversation" Francis Ford Coppola has invented and introduced an intriguing concept about the technology used to infiltrate and spy on private lives. In the exposition a young couple is seen talking in the park but their dialogues are every now and then unintelligible by interference, making the viewer slowly realize that their sound is actually taped by hidden microphones and transmitted to Harry's transmitter. But except for being clever and stylish, that scene also establishes the film's theme; the clash of perception and reality. The whole story is charged with extremely static and demanding shots, but her biggest problem is that it's somewhat empty. Namely, the only surveillances shown are those from the couple and to some degree Harry (he finds a microphone hidden in his pen) but the open end in which the hero doesn't know if he is being spied on so he demolishes his whole apartment in search for a hidden microphone is left shaky and underused. The film is a philosophical take on the hunter becoming hunted, and it's interesting despite being somewhat stiff, tame and only in child's shoes - Hackman's own later film "Enemy of the State" would elaborate that context a lot more.