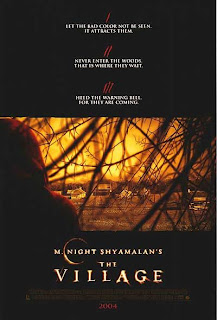 A small village surrounded by a deep forest. A death date on a tombstone says it's 1897. The villagers never leave into the forest because it is inhabited by bizarre creatures called 'Those We Don't Speak Of' - if nobody crosses their limits, they won't attack them. But one youngster, Lucius, is rebellious and wants to go outside to the town to get medical supplies, but the village elders, headed by Edward Walker, refuse him to do so. Edward's blind daughter, Ivy, falls in love with Lucius, but he gets terminally wounded by Noah, a mentally disabled man. In order to get the medicine, Edwards tells her the secret: the creatures are fake, just costumes the elders wear to scare everyone. Ivy leaves the forest and gets to a modern day road where one ranger inhis car goes to his station and gives her the medicine.

Many critics bashed M. Night Shyamalan for his fourth film in his "plot twist" series, "The Village", but, quite frankly, it's as good as his previous ones, like "The Sixth Sense" or "Unbreakable", because he simply has some spark, some talent to pull thin, one note stories across and make them intrigue, which is already established in the exposition filled with many great little details of the 19th Century villagers, like the one where two girls sweep the floor with their brooms and jokingly turn around for 360 degrees or little boys who play "courage" games by daring each other who will stay longer in front of the forest where mysterious creatures called 'Those We Don't Speak Of' live. The whole film unravels like an elevated horror, like a scary story in front of the camp fire told just right, and Shyamalan makes even the most banal dialogues or situations seem interesting because he directs them virtuoso at moments and manages to awake the full attention of the viewers since he always tells everything from the subjective perspective of the characters. The film is great up until the point where it introduces his classic plot twist which, as in his previous films, simply don't work and disappoint, causing even some viewers to rethink and revalue the whole film and judge it poorer than it actually is, even though it's in a strange way actually valid and has some wacky sense. Truly, if it weren't introduced some 30 minutes before the end, maybe the film would have been so much better, but even as it is, it's a very interesting essay about a society that created an imaginary fear in order to control it's inhabitants, conservatism and man's everlasting tendency of autosuggestion to hide from the awful real world.