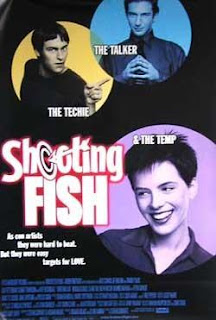 Jez and Dylan met relatively late, but they always had similarities: they both come from an orphanage, are ex convicts because they deal with frauds, while their goal is to become rich and buy a big house. For their newest fraud, they hire a medicine student, Georgie, and simulate a non-existing computer that reacts on voice and thus attract potential financiers who give them money for that "revolution". The trio takes the money and runs away, but Jez and Dylan land in prison for three months. When they get out they talk Georgie out of marrying the rich Roger but their dream is in peril. Roger buys the house Georgie intended for her brother who suffers from Down syndrome, so she instead buys off a valuable horse and wins at a horse race thanks to Jez and Dylan. In order to get the horse, Roger swaps it for the house. Jez marries Georgie.

British con-comedy "Shooting Fish" is sadly just one of those run-of-the-mill con-comedies that don't stand out in the long term, even though it has it moments. Stefan Schwartz's directorial debut doesn't just want to flatter and imitate the role model "A Fish Called Wanda" just in it's title, but in similar situations and motivations of the characters, even though his heroes are actually much warmer and kinder, what deserves praise. Still, when it is found out Georgie's main goal for stealing and fraud is to help her brother suffering from Down syndrome, the story becomes slightly too contrived in appeasing their bad side. There's not a lack of charm and cleverness (in one neat scene, after they earned 2 million ponds from a fraud, they are shocked they might loose everything because all the fifty pound notes in the land are being reclaimed since the Queen doesn't like her picture!), but also not of mild tone and loss of energy, which caused some of the critics to not be too pleased. An occasionally fun overlong episodic story (traversing from a computer fraud to a horse race fraud) with much more sympathies than it seems, while Dan Futterman is wonderfully quirky as the hero Dylan and Kate Beckinsale in a surprisingly unattractive appearance as Georgie.