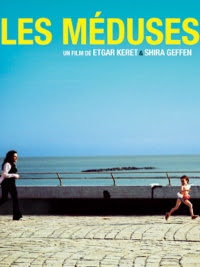 Three stories in Tel Aviv. Batia is a young waitress who finds a mute girl in the sea. She brings her to a police station, but decides to keep her at her apartment. When she brings her at her job, the girl disappears and Batia is fired, but she becomes a friend with a woman who was also fired. Batia is hit by a truck, but manages to recover and remember her childhood...Michael and Keren have just got married, but she breaks her leg in the toilet so they are forced to cancel their honeymoon to the Caribbeans. They move to a shabby hotel where Michael meets a mysterious woman who plans to commit suicide...Joy, a Philippine babysitter, gets a job to take care of an old lady. The two of them become friends.

Husband-and-wife director team Shira Geffen and Etgar Keret delivered an interesting film debut with "Jellyfish", a bizarre achievement that mixes introverted drama and extroverted, quirky and surreal comical moments (a 5-year old girl that just emerges from the sea and Baita adopts her), for which they won the Golden Camera at the Cannes film festival. It's an unusual and refreshingly off-beat film with brilliant roles for the excellent Sarah Adler and Noa Knoller, at best when it introduces a few surreal lyrical moments, like when a police officer is talking with Batia about disappeared people, takes a paper file of a woman who disappeared in the sea and makes a ship out of it or when Batia reaches for her shoes on the street, than stands up and behind her there's a poster of her mother "shielding" her from the rain with her hands stretched out to resemble a roof, but out of three stories that try to imitate Altman, at least one is obsolete. By creating an interesting and humane film, Geffen and Keret managed to input some documentary fell to it and occasional sparse spark of magic. Even though it only lasts for 79 minutes, the film seems slightly too slow and overlong, and the structure has serious problems, but maybe it's a pity to criticize this truly fine film because it's really well made.