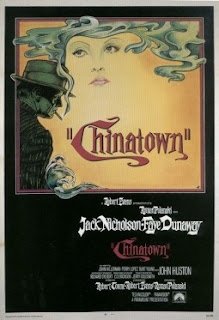 Los Angeles, '37. J.J. Jake Gites is a private detective specialized for revealing extramarital affairs. His new customer, a woman who pretends to be Evelyn Mulwray, hires him to spy on her husband Hollis, a contractor who works for the Water department, but refuses to build a dam for the city because it might collapse. Quickly, he is found dead and Jake discovers his wife, the real Evelyn, never gave him the assignment to spy on him. Gradually, he finds out Evelyn's father Noah is a rich owner of the water company who is scaring farmers away from an infertile land to later buy it and make a dam which will make it fertile and expensive. He also pours fresh water into the ocean, even though there's a big drought in town. Lieutenant Lou wants to arrest Evelyn, but Jake helps her escape with her daughter conceived from Noah's rape. She gets killed in Chinatown.

"Chinatown", winner of one Oscar (best screenplay), 3 BAFTAs (actor Jack Nicholson, director, screenplay) and 4 Golden Globes (best picture, director, screenplay, actor J. Nicholson), is a real modern thoroughbred film noir, capturing the essence and atmosphere of that genre and transforming it in the 70s: from the private detective, up to femme fatale and to a complicated story that hides many secret intrigues. Many films tried to copy the long dead film noir, but Roman Polanski's achievement really captures the spirit of it. It's not a coincidence that John Huston, the director of "The Maltese Falcon", here plays a major role. Even though it's a crime story with mysteries that get explained, it transcends into deeper meanings - by making the protagonist Jake desperately trying to discover what's going on around him and what secrets some system is hiding from him and everyone else, it symbolically speaks about Epistemology and man's ever lasting search to find the limits of knowledge, cognition and enlightenment. Robert Towne's script is truly meticulously written, planned and conceptualized and is full with great little details: in one scene, Jake takes the visit card of Russ Yelbburton, a major employee for the Water department, with him from his office, and later on gives it to some security guard introducing himself as Yelburton to get into restricted areas.

In land registration office, Jake takes a scale and hides the noise from ripping of the paper with his cough! In another clever scene, he slightly breaks the rear end light from Evelyn's car, causing it to blink in the dark so that he can follow her with ease. But the best part is that it's actually a film that's intellectually stimulating: unlike many modern light films where the viewers can "turn off" their brains, here the story actually demands attention and logic, offering great brain training. Nicholson is an unusual actor - in his early roles he was really wonderful and humble, but during the time when he earned his over-the-top 12 Oscar nominations, his ego became too huge and spoiled him. Actually, if "Chinatown" was by some strange chance ignored by the Oscars, it would have advanced into an art classic and seemed even better. Also, Nicholson is no Bogart and Jake is no Marlowe. Still, non-the-less, Nicholson really delivered an excellent and unusual role - for one thing, his Jake wears a bandage over his nose almost half of the film. "Chinatown" is slightly unexciting and too calm, and it's title doesn't have much to do with the plot, but it's definitely an excellent film, with such stunning and bizarre moments as when it turns out that Evelyn has a woman who is "at the same time her daughter and her sister".