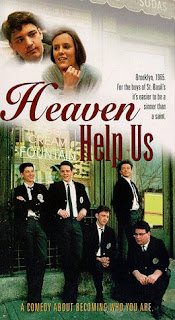 Brooklyn, '65. The 16-year old Michael Dunn tries to adapt to his new school, the St. Basil's Catholic Boys School. He makes friends with the intellectual student Caesar, but is shocked by the monks'/ teachers' harsh attitude that demands discipline and loyalty, and every student who neglects that gets brutally, physically punished. The worst one is Constance, but the best one is the mild and reasonable Timothy. At the dance, the boys meet a few girls and the wild Rooney persuades Caesar to go on a double date in his father's car, but it ends in a disaster. Michael falls in love with Danni who runs a store with her sick dad, but she gets taken away by the social workers that were notified by the monks. He rebels against the school with his friends and even hits Constance in self defence, which causes the principal to loosen up the harsh rules.

If there was ever an excellent junction between a drama and a comedy, then this is a typical example: it's a matter of a shining film, that is precisely that despite a few vulgar scenes, black and white solutions and cliches because such a provocative and clever screenplay can hardly be bereaved from sympathies and quality, symbolically showing youth (students) and religion (Catholic school) that suppresses and oppresses them, meddling and manipulating there where it really shouldn't. Michael Dinner leads such a direction that we ourselves would hate the monks shown on film - in one humorous, but at the same time serious sequence, Brother Constance notices student Caesar chewing bubble gum in his class and forces him to put it on his nose and let it stay there the whole day (!), while he slams Roooney's head on the blackboard and makes him eat his homework in front of everyone.

However, the film also shows the different side so that we can see that there are also reasonable monks present, like the cool Brother Timothy, so that the whole thing wouldn't be one sided. All that is in the end very amusing and fun, while the violence just gives the comical story a dose of reality and isn't anything terrible or without a reason, questioning secularism and violence in religions. It is a pity this cult independent jewel is rather forgotten today - the teenage students in the film are observed, meticulously portrayed and we completely understand them: Michael, who is played by Andrew McCarthy, leads also his private life, where his character is excellently described, from his relationship with his friends up to the touching compassion with his little sister who secretly sneaks in into his bed so that he can give her his blessings, and almost every little role is wonderfully created, especially Cathleen who fell in love with the smart Caesar and who is played lovely by Yeardley Smith.