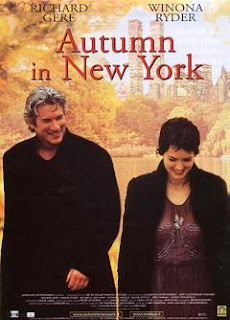 New York. Will Keane is a 48-year old bachelor who doesn't believe in love. He breaks up his newest relationship on a bridge. He is also the owner of a restaurant where he meets Charlotte who is celebrating her 22nd birthday. Will invites her to his apartment under the pretext that he wants to see her new hat creation, but then takes her on a diner and lands with her in bed. Then she admits him that she is suffering from a heart disorder and that she has only one more year to live. A deep relationship develops between them until Charlotte discovers Will once had a relationship with her mother and breaks up with him. Still, Will apologizes and his daughter manages to find a doctor who is willing to operate Charlotte's heart. But the operation isn't successful and Will remains alone.

"Autumn in New York" tackles a serious and delicate theme of a guy helplessly observing his young, but terminally ill girlfriend but due to cheap pathetic tone it turns into a soap opera romance where there is almost nothing to see. Also, a similar plot was handled earlier in the more famous "Love Story". Among the sparse interesting moments that at least cause a reaction from the viewer is a neat scene near the start where Will (Richard Gere) brings his girlfriend to a bridge and tells her that he is breaking up with her - at first, she thinks he is joking and adds: "All right, just wait on the boat in the river until you break up with me!", but then she realizes he isn't joking. Winona Ryder is quite a fascinating actress, with an unique innocent charisma and it's sad she didn't show her full range due to a thin plot - in fact, she is slightly peculiar when she always giggles as soon as she spots Gere, thus the best moments are actually when the story dares to show some humor, like the eccentric design of her hats or the moment where her grandmother sympathetically apologizes to Will for the mess in her house: "Sorry for the mess, my maid died 14 years ago". As a romance, the film has only 1 % of real chemistry and charm, thus turning really weak. The actors don't have a smart pedestal and when Charlotte dies there is no epilogue - Gere just sits in a boat, a swan passes by, the end. It's a watchable and easily digestible film, but if you want to see a real romance, watch "His and Her Circumstances".