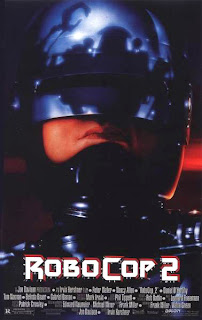 Despite the fact that mega corporation OCP managed to make RoboCop, the big crime rate is still present in Detroit. One of the main troublemakers is criminal Cain who sells deadly drug "Nuke", assisted by his girlfriend, Angie, and a 10-year old boy, Hob. RoboCop wants to stop him, but gets demolished into pieces by a electromagnet. Still, OCP manages to reassemble him, much to the pleasure of his police colleague Lewis. But OCP takes Cain's brain and places it into RoboCop 2, a 12 ft tall robot that should replace RoboCop and fight crime more efficiently. Still, RoboCop 2 goes amok, killing people, so RoboCop confronts him in the OCP headquarters. After a fierce fight, RoboCop manages to pull out Cain's brain from the robot and destroy it.


Frank Miller, before his huge success with "Sin City", experienced a big setback and disappointment when his screenplay for "RoboCop 2" was completely changed by the producers, which is a pity considering author's wishes and concepts should be respected, and not ignored. The final result is a sequel that's definitely worse than the rather fascinating low budget "RoboCop", even though it looks more "modern" - the cinematography is sharper and even Robo's mechanic suit is blue, in contrast with the original gray color from the first film. The main problem is that the crew behind the film forcefully tried to imitate the first film - but all the wrong elements, like violence and gore, which resulted in mean spirited and dumbing violence that's just there because they thought it "should be there" due to "immoral is cool" attitude - instead of adressing also more subtle, satirical and dramatic touches, which were much more interesting in the first film.

Just take the tasteless TV commercial with the blue skin creme against Sun's radiation or the swearing of the 12-year old boy protagonist Hob. Why have a child play a major role in a brutal movie not suitable for audiences aged 18 or under? Why couldn't Hob have been a grown up? Or how else to explain the fact that one crucial scene, the one where RoboCop visits his own grave, was edited out of the film? These and other ill-conceived ideas ruin the film. Still, as a whole, this is still a very solid sequel and critics were really too harsh towards it (its average rating on Rotten Tomatoes is only 4.5/10) since it has one redeeming feature, the one where all the inspiration was saved for the last 20 minutes finale, which displays a truly spectacular, meticulously crated fight between RoboCop and the 12 ft tall, expressionistic evil robot, RoboCain - set in the scene with the help of Phil Tippett's outstanding stop-motion animation - from the OCP building up to the street, which is a small action gem. If it didn't have dumbing violence, trashy tone, completely unnecessary child as a criminal and if the main character RoboCop was at least developed a little bit instead of getting degraded into a supporting character (after Cain gets arrested, neither RoboCop nor Lewis show up for full 20 minutes (!) in the film), "RoboCop 2" would have been more than just a cult "guilty pleasure".