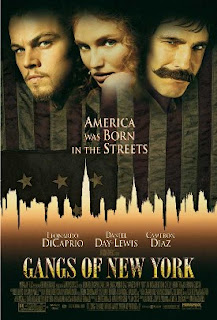 New York, 1846. As a little boy, Amsterdam saw how criminal William "The Butcher" killed his father, priest Vallon, in order for his gang "The Nativists" to remain rulers of the "Five Points" district. 16 years later, Amsterdam became a grown up man whose only goal is to take revenge on William. He joins forces with small time crook Johnny in order to work for William - he quickly gains his trust. William even places him as his most trustworthy associate and meets with the peculiar Jenny. When Amsterdam tries to kill him, William repels him. Since the Civil war is going on, Amsterdam gathers all unsatisfied Irish migrants and starts an uprising in which he kills William.

Only fans unfamiliar with Martin Scorsese's earlier work will truly enjoy "Gangs of New York": the film won 2 Golden Globes (best music and director - ironically Scorsese's first, even though he was in weaker shape), one BAFTA (best actor Daniel Day-Lewis) and 10 Oscar nominations, but that still doesn't cover up the fact that it's horribly chaotic and forceful. Scorsese directed the story in a surprisingly anemic way maybe because the basic premise has already been used thousand times (as a child, the hero saw the bad guy kills his parent and swears revenge) and delivered in better films, like Milius' "Conan the Barbarian", DiCaprio and Day-Lewis stiffly play over-the-top macho roles while Cameron Diaz's role is a one dimensional figure. Still, despite a whole bunch of flaws, the film has interesting moments. William, who hates Irish people with passion, speaks on one occasion: "And the seventh day, God took a rest. He sat down on Britain, relieved himself and Ireland "fell out" of him". Amsterdam sells corpses to doctors. In the final scene, Amsterdam leaves the cemetery with Jenny, sadly concluding that future generations won't even remember them, while in a fast motion shot the modern New York "emerges" in the background. A good film, yet pompous with it's overlong 3 hours of running time.