She's Having a Baby 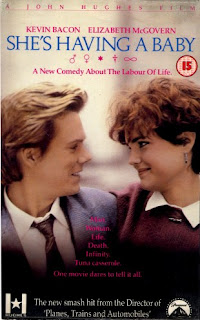 Jake Briggs stands in front of a church with his friend Davis and debates if he should or not get married. When Travis says to him "You'll be happy...but you won't know it" he finally agrees to do it and marries Kristy, his girlfriend he knew ever since high school. Instead of a honeymoon, they go to a motel in order for Jake to finish his college. He also plans to write a book and finds a job as an author for commercials. Years pass by and the young couple moves in to a rural suburb, but their parents hassle them to get a baby. Jake is shocked when he finds out Kristy didn't take her pills for three months, yet when it turns out she still didn't get pregnant they discover he "shoots blanks". With a lot of trouble and medical treatment, Kristy finally gets pregnant and gives birth to a baby while Jake writes a book about it.

Comedy "She's Having a Baby" grossed only 16 million $ in the US theatres and is generally considered one of John Hughes' weaker films, but frankly it's quite a good film with enough virtues. Hughes, a symbol for the kitschy side of the 80s, is no master by any means and at moments ruined the delicate theme about a young couple's reaction to pregnancy by handling it in a distorted and incomprehensibly bizarre way: for instance, the grotesque scene in which the whole hospital is laughing at the hero Jake because he filled his sperm cup only half way is completely unnecessary since mean-spirited humor isn't always subversive. Still, Hughes is still an author who has sympathies for his heroes and radiates some kind of humanity and family values despite everything, while Kevin Bacon and the story, although degraded at moments, cope rather well with the premise. The movie is sweet and touching, containing a sufficient dose of neat ideas (the scene in which Jake is imagining the walls in his living room are narrowing serves as a great symbol for his state of pressure) and gags, like the scene where the couple in imagining that their parents are going to give them advice during intercourse or when Jake's employer tells him he set a new record in lying in his resume in order to get the job. In the end, during the end credit, many stars have a cameo appearance, like John Candy, Dan Aykroyd, Bill Murray, Kirstie Alley, Matthew Broderick and Ted Danson, giving suggestions for the name of the baby. "She's Having a Baby" is as a whole a really sweet slice of insight into a young couple's new life and holds up as well as any other Hughes film.