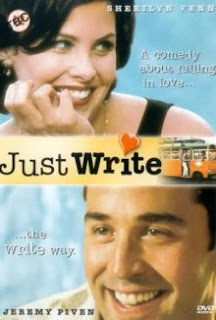 Ever since he was a little child, Harold McMurphy wanted to become a tourist guide in a bus, showing people where famous Hollywood starts live. He is now 30 years old, his mother died and his father broke his leg. One night he meets the famous movie star Amanda Clark in a bar and ashamed of his job decides to lie that he writes screenplays. She gives him the synopsis for her new film and he agrees with her that it should be written with more spark for the female characters. They slowly fall in love, much to the dismay of Amanda's ex-boyfriend Rich. Harold asks for help from Amanda's agent and he sends him money for him to rewrite the script. Harold succeeds, tells her the truth and they become a couple.

"Just Write", a low budget forerunner of "Notting Hill", is a mild romantic comedy with which time passes by properly but it doesn't contain anything special and is rather empty and underused. The screenwriter Stan Williamson (for whom this was his first and, sadly, last film) probably placed some autobiographical elements in the story about a false writer who is suppose to rewrite and improve a screenplay for his actress, Amanda, he is in love with, but it seemed someone should have also improved the screenplay for this thin, albeit cute film. The premise is childishly naive and unconvincing, while director Andrew Gallerani didn't manage to improve or enrich it, but instead just standardly placed the camera and filmed his actors telling lines from the plot. Among the plot holes is the one that Amanda never asks Harold what he wrote previously (which suits him fine since he is just a tourist guide) up to the scene where his father just causally and conveniently knocks on the door of the mansion of the famous star. Among the charming bits is Yeardley Smith's performance, performing in the role of a mistress who appears some 60 minutes into the film.