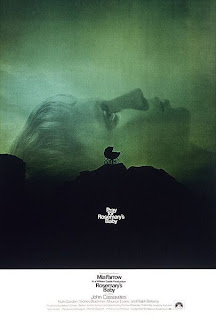 Rosemary Woodhouse and her husband, actor Guy, move to New York and find an apartment that has a bad reputation since it's tenants died in it recently. One tenant one day commits suicide by jumping of the window. They meet their neighbors, an elderly couple, Minnie and Roman. They send Rosemary some sort of mousse, making her nauseous. That night she has a dream that she is raped by a demon and the next morning finds out she is pregnant. Guy claims having had intercourse with her while she was sleeping, but she doubts it. Suddenly Minnie and Roman are very helpful around her pregnancy and persuade her to visit their gynecologist. Rosemary discovers the two of them practice black magic so she tries to escape, but they find her and she gives birth to Satan's child. Guy was promised success if he complies. Rosemary is shocked, but still decides to raise the baby.

The first big American hit from director Roman Polanski, "Rosemary's Baby" is a psychological horror movie that refuses to use special effects, masks, monsters or cheap elements of thrill, but at the same time the whole movie enjoys an infamous reputation due to the demonic premise of the story. Filmed without music, the film has a deceivingly calm atmosphere of routine, and thus isn't as suspenseful as it is disturbing, and quite frankly it's a little bit overrated. The main flaw is that the mythological story seems more like a monologue than a dialogue - Rosemary didn't exactly use her intelligence to fight against intrigues of her dubious "friends" who practice black magic or to trick them, acting more like a passive body. Heck, why couldn't she just have made an abortion? All supporting characters are one dimensional, stiff and slightly vague - it's understandable the screenplay was nominated for a Golden Globe and an Oscar, but puzzling that Ruth Gordon actually won those awards as best supporting actress, since she doesn't stand out particularly. The cleverness of the story lies in the fact that it's so ambiguous - it may be that Rosemary is carrying Satan's child, and then again, it might just be that she has hallucinations due to mood disorders during the pregnancy. If the first is the cause, it just shows how evil can come and present itself as something nice, noticeable in the old couple Minnie and Roman who pretend to be nice and helpful during her pregnancy, but actually seem to have some of their own secret agendas. Since even Rosemary's husband Guy decided to help them for success, it also shows how some people are willing to sacrifice others for their personal goals. The heroine's nightmare, in which she has a surreal dream that she is raped by a monster, is disturbing, while it is clever the camera never shows how the baby looks like, just showing the cradle, but the ending ended there where the real story could have started in the first place.