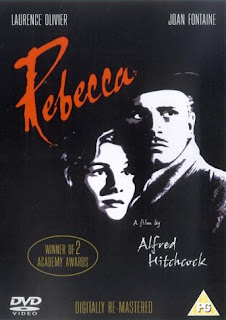 In Monte Carlo, widowed Maxim de Winter meets a shy and lonely girl who works for a rich lady. Maxim is so fascinated by the young girl that he marries her and she becomes the new Mrs. Winter. She leaves with him to his castle Manderley and figures and the housekeeper Danvers hates her. When the girl asks Danvers how Maxim's first wife, Rebecca, died, she gets the answer that the she died on a ship during a sea storm. In the castle, Rebecca's room stayed untouched. One day, the ship with Rebecca's dead body stands on the beach - causing Maxim to admit the girl that he hated Rebecca and accidentally killed her after an argument, but placed it to look as an accident. He then hears from the doctor she had cancer anyway. Denvers sets the castle on fire.

Critics who characterize "Rebecca" as a suspense thriller either don't know what they are talking about or they are still under the impression of Alfred Hitchcock's reputation as a "master of suspense", because the film is actually a gentle and calm drama with only slight touches of mystery and marriage tormented by guilt. "Rebecca" is an noteworthy adaptation of Daphne du Maurier's novel of the same name that was nominated for 11 Oscars and won two - for best cinematography and best picture, the only time a Hitchcock movie won that award, which is a pity since the academy should have awarded at least 5 more of his movies as best picture, but even a greater pity is the fact that the master himself never won the award as best director. Already in the exposition, "Rebecca" captivates with it's impressive and eerie opening where the camera travels through the dark forest until the castle, while the whole story is filled with lively, quirky characters, like the lady who extinguishes a cigar in a moisturizer cup, and just like in the book, the main heroine's name (played brilliantly by the timid Joan Fontaine) is never mentioned (!), but she is present, while Rebecca's name is constantly mentioned throughout the film, but she never shows up, Laurence Olivier is great as always, while Hitchcock has a small cameo some 120 minutes into the film as a passer-by by the phone booth. Even though "Rebecca" isn't one of Hitchcock's most famous films, with time it justifiably gained the status of a classic.