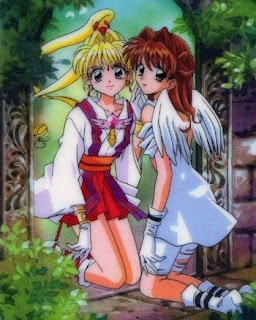 Maron Kusakabe seems like a normal teenage girl with brown hair and eyes, but when she uses her powers of a magic medallion, she transforms into blond Jeanne. She leads this double life ever since a little female angel Fin Fish, whom only her can see, gave her the role to fight with God against the prince of Darkness: namely, the evil sends demons that hide into various objects, like a painting or a statue, who then become dangerous for their owners, so Jeanne has to save them by inevitably destroying the objects. Sadly, by doing so, everyone thinks she is a thief of valuable art, so she is persecuted by Maron, daughter of the chief of police and Maron's apartment neighbor. Also, Maron wears inside her the spirit of Joan of Arc, and her job is made further difficult with a rival called Sindbad, in reality Maron's friend Chiyako, whose mentor is angel Axsis who steals her assignments. In the end, Jeanne discovers that they are doing so because Fin Fish actually secretly works for the prince of Darkness. Still, they convert her and Maron falls in love with Chiyako.

"Kamikaze Kaitou Jeanne" is a standard, but suitably good contribution to the famous 'Magical girl' anime genre, equipped with the modern computer animation. The series is slightly better than the also popular "Wedding Peach", but both seem like slaves imitating that jewel of 'Magical girl' anime, "Sailor Moon": it's not an accident that in the 5th episode of "Wedding Peach" Ami had a small "cameo" appearance, nor that "Jeanne" contains the already established classical "ditsy heroine battles monsters of the day, wins, next episode" formula, a similar costume design, a sidekick, a male rival that becomes her love interest and fantasy elements. In episode 12, Kotono Mitsuishi even has a guest appearance by lending her voice to an actress who stares in Romeo and Juliet. It's an interesting show and using a well known formula doesn't always necessarily have to be something bad, but this adaptation of the manga written by Arina Tanemura somehow seems stiff, schematic and only rarely justifies the reason why it was made the way it was.
It also contains one of those anime trademark plot holes that are not explained in a satisfying way: in this case, Jeanne steals famous art, like paintings, because they contain demons, and destroys them, but every time she storms into a museum, the police is already there because they know were she is going to strike next. How? Because Jeanne's sidekick Fin Fish always sends them an invitation card to their next target! When Jeanne justifiably gets upset every time since their mission will get jeopardized if she gets arrested, Fin Fish gives her some silly explanation like "I forgot about that" or "you need practice anyway". Since Sindbad and Jeanne also work against evil forces, it's not clear why they simply wouldn't join forces instead of always be arch rivals. The biggest problem remains the lame twist near the end: namely, it turns out Fin Fish has been secretly working for the evil forces all the time, making Jeanne's effort get focused in a completely wrong direction, while other flaws are also unconvincing or kitschy scenes and banality. Still, that mysterious anime spark and magic of 'Magical girl' escapism still have their charm, like in the character of feisty Miyako, the daughter of the chief of police or in the scene where Jeanne transforms simultaneously with the opening of the concert.