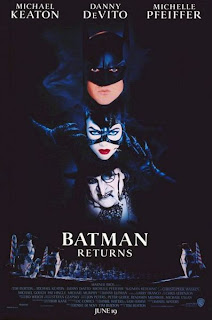 Gotham city. A rich couple gets a deformed baby and decides to throw it in the sever. 33 years later, the baby has become the Penguin man who starts an attack on town with his thugs, only to kidnap rich, corrupt businessman Max Shreck. The two of them become allies: under the pretext that he wants to find out who his parents were, Penguin investigates the birth clinic and writes down all the names of the first born to kidnap and kill them. At the same time, Max threw his secretary Seline out of his tower, but she survived and became Catwoman. Bruce Wayne falls in love with Selina, but also fights her as Batman. When Batman stops the kidnapping of the babies, Penguin and Max die, while Catwoman disappears mysteriously.

Even though it has a shaky reputation, "Batman Returns" is actually as good, if not even at moments a better sequel to the original "Batman", which was a huge hit. It's a real Tim Burton film from start to finish: it has black humor, Gothic iconography, macabre touch, dark atmosphere and that spark of German expressionism, noticeable in the design of Gotham city and one of the villains, called - Max Shreck! Burton once again realized that one of the ways to make Bob Kane's goofy and silly characters like Penguin and Catwoman work is to make them as dark as possible, thus making the viewer stop questioning their reality: already in the exposition, where a rich couple gives birth to a deformed baby and drops it into the sever, where it grows into the Penguin man, does the movie follow that cruel rule. Actually, for the first 20 minutes, the movie is even excellent, but once all those Penguin's thugs from the circus enter the stage, the story transforms into a carnival spectacle. Unlike the first film, where he was almost overshadowed by the Joker, here Batman has a better developed role and more screen time, and Michael Keaton still proves to be the right choice to play him. Action sequences are almost over-the-top (a villain blows fire at the Batmobile, so Batman simply turns his vehicle around and fries him with his exhaust system's flame), some moments too disgusting, the former heroine Vicki is sadly absent and the ending is truly awful, but the story has it's charm, like in the scene where Selina listens to her answering machine and hears her own voice that reminds her to go back to her office or when Catwoman plays jump-rope with her whip in the shopping mall. Even though many will wonder if he suffers from some kind of autism, Burton once again proved with his adult stories about outsiders that he has some kind of hermetic, bizarre talent and style.