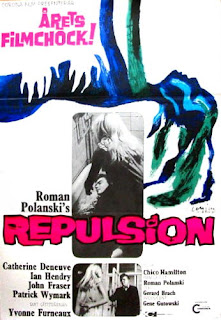 London. Carole is a young girl who works in a big hair dress saloon and lives with her sister Helene in one apartment. Many guys on the street toss Carole flattering remarks about her beauty, but she is annoyed by it. She is timid and is more and more repulsed by her acquaintance Colin who wants to persuade her to be his girlfriend, and by the fact that Helene brought her lover Michael into their apartment. Generally, men disgust her. When Helene and Michael leave for a vacation, she stays all alone in the apartment and starts hallucinating. When Colin enters her apartment, she kills him, and later on also eliminates the landlord. When Helene and Michael return, they find her unconscious.

From exposition in which the opening credits are unfolding in front of a close-up shot of the heroine's eye up until the final scene that zooms in on her photo in the youth, psychological drama "Repulsion", with a perfectly hit measure between horror and morbidity, is one of the best films directed by Roman Polanski, superior than his overhyped "Rosemary's Baby". "Repulsion", the first part of his unofficial trilogy of anxiety of apartment living - the other two are "Rosemary" and "The Tenant" - is a truly great achievement: the simple, shocking story about a girl, Carole (excellent Catherine Deneuve), who is for some reason disgusted by men, truly hasn't dated at all, despite the fact that it was shot in black and white. In fact, some scenes, like the one where she cannot stand listening to her sister who is moaning from orgasm in the neighboring room, really seem as if they were filmed today, while Hitchcock's touch can also be sensed in subtle themes about sexual repression of the heroine. Could it even be that Carole was molested as a young girl, which caused her to react in such a negative way at men? Hypnotic visual style, which richly uses wide lens and unusual camera angles, abates some overstretched moments, while Polanski directs this subversive story about genophobia in such a way that we understand the deranged heroine, even if we don't approve her drastic actions.