Beauty of the Day 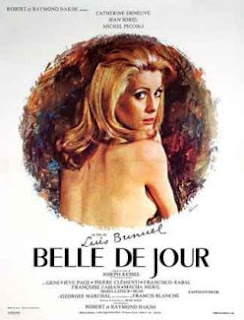 Young Severine is married to the successful doctor Pierre who stopped exciting her in bed a long time ago. That's why she always has spicy erotic fantasies in which she gets humiliated by him. One day she accidentally hears how the prostitutes work which excites her while Pierre's friend Henri gives her the address to a secret brothel in town. After a lot of hesitation, Severine enters the apartment and gets hired by Madam Anais as a prostitute called "Beauty of the Day". She soon gets various customers: a Chinese, a professor, a company owner...but one day criminal Marcel falls in love with her and wounds her husband, but gets killed by the police. Pierre stays disabled.

One of the most famous, normal - and best - movies from director Luis Bunuel, erotic drama "Beauty of the Day" surprised with an honest and subtle analysis of the job of the prostitution and frigidity, remaining an interesting, tricky film even today. It's truly not a small thing to make a film with a beautiful and poplar blond (Catherine Deneuve) and avoid comments of the critics about how she looks like a Barbie doll, but Bunuel's "Beauty of the Day" is so clever and masterful that it would function even if the main role was given to Paris Hilton. Even though some have characterized the film as controversial back in 1967, it actually does not tend to provoke or tantalize the audience, but just to directly tell a taboo story about something that really happens to some in real life, namely about women who got married and later realized they are not excited by their husbands anymore, escaping in erotic daydreams - especially fascinating is the sequence where the intrigued Severine is afraid to enter the building where a secret brothel is situated and hesitates to enlist to work as a prostitute, but somehow cannot resist her curiosity so she does, while a theme for itself are her bizarre fantasies (her husband is throwing mud at her or releasing her from chains), and it's interesting that the story never directly shows a shot of two people having sex, but instead stays damped.