A Time for Drunken Horses 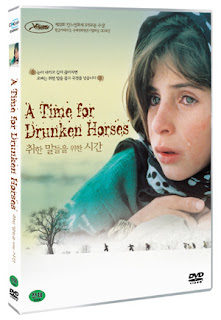 An old man hires six Kurdish boys to help him carry a heavy cargo through the mountains covered by snow. Among them is also the little boy Ayub whose mother died and he now cares for his deformed brother Madi, and his two sisters Rojin and Ameneh. On the Iran-Iraqi border the children in the car hide smuggled notebooks. When their father dies from a mine, Ayub takes the main role in the family and starts smuggling regulary to earn 150.000 Tuman for Madi's operation. Since Madi's state is worse by the day, his uncle gives Rojin for an arranged wedding for his friend to earn money. Ayub takes Madi with him but they fall into an ambush and get caught.

Like most films from Iran, "A Time for Drunken Horses" is also a gentle, introverted and realistic drama that handles social problems of it's protagonists and relies on Italian neorealism, even going so far to hire real people instead of actors. The critique of the harsh world is obvious already in the scene where under-aged children work and carry heavy cargo or when they are forced to jump out of the car on the border in order not to get caught by custom control. Especially tragic is the destiny of the crippled and mentally handicapped boy Madi (played by in reality sick Madi Ekhtiardini) whom doctors predict death in 8 month even in case of an operation. Bahman Ghobadi directs the touching story in a raw and meditative way, reminding a bit of director Kiarostami, using amazing landscapes cowered in snow, but at the same time the film is also substantially too passive, objective, stiff and deterministically set. The problem with most films from Iran is the fact that it's cinema is among the most conservative in the world and rarely dares to directly tackle something courageously. Though even that's better than let's say Saudi Arabia that didn't even have a cinema until '06 because it regarded films as "immoral". In that aspect, Ghobadi could have at least tried to incorporate some witted elements in his characters, instead of just let them vegetate until the end. Still, he showed a realistic insight into Kurdish lives and gave another contribution to spiritual films.