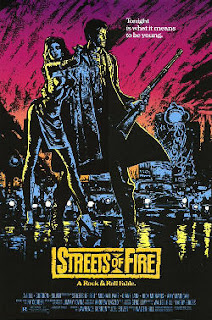 Richmond. Singer Ellen Aim is in the middle of a Rock' N' Roll concert, performing on stage in front of the audience. But suddenly an evil motorcycle gang head by Raven storms into the arena and kidnaps her. But Tom Cody arrives in town, a justice fighter, who settles into the apartment of his sister who persuades him to save Ellen. Tom, together with girl McCoy and Billy, Ellen's manager and lover, sets on to a rescue mission. They save Ellen, get rid of their car and continue their getaway in a bus of a Black music band. They return to Richmond, but Raven invites Tom to an direct duel. Tom wins and leaves with McCoy in a Cadillac, while Ellen continues singing.

With some movies you can only wonder at why they remained unknown and were never included into the status of a classic. "Streets of Fire" is one of those cult films. Besides the fact that it perfectly captured the esoteric spirit of the 80s, this achievement contains a hermetic charm and artificiality with class; from unbelievable exposition in which a motorcycle gang simply storms into a concert and kidnaps the main singer Ellen from the stage (!), through the sequence in which the defeated bad guy Raven looks at the superior fighter Tom and exchanges a line with him ("I finally meet a worthy rival." - "Then this is your lucky day") up to the scene where Tom simply "stops" a bus with his arm, this is a roller coaster of great ideas, amusingly generating "elevated" 50s dialogues. It's really a pity Michael Pare simply disappeared from the movies later on in his career, as well as director Walter Hill. This film shouldn't be so much fun. It's thin and it can be simply reduced to the old archetype of a hero saving the girl. But it has style and spirit. If one were to nominate the most underrated movies of the 80s, this one would definitely be in the top 10.