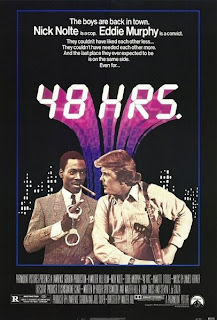 San Francisco. Gangster Ganz escapes from prison and takes the mistress of his former partner as a hostage to force him to hand over the money they once robbed from a bank. When Ganz kills two of his colleagues, police officer Jack bails the Black convict Reggie from prison for 48 hours to help him catch Ganz. Reggie babbles non-stop, but still helps him. The unusual duo manages to kill Ganz while Jack even saves the money from the bank to wait for Reggie until he gets released from prison.

Unusual achievement with elements of crime thriller and comedy, the first "buddy cop" film "48 Hours" is today a substantially dated film that was a huge hit back in 1982 due to the affirmation of the neat archetype of two different characters that have to work together and the dynamic performance from Eddie Murphy, who thanks to this film became a star and got his first Golden Globe nomination, as best new star. Actually, Murphy is the only excellent ingredient in the stiff and overtly brutal story that was directed by then famous Walter Hill rather mild and half-heartedly. Still, despite the flaws and the fact that it's isn't anything special, "48" has it's moments. Among them is the sequence where the Black Reggie, in order to win a bet, enters a racist bar and with the help of Jack's police badge starts acting as a tough and dangerous cop, searching the White guests in order to scare to owner and opt him to give him information about the bad guy Ganz.