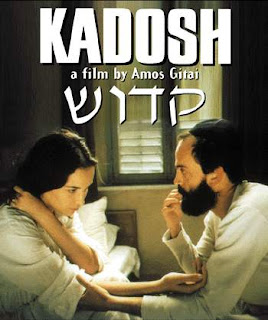 Jerusalem. Rivka is a young woman living in in the ultra Orthodox Mea Shearim quarter of the city, married to Meir. Although they love each other and are married for 10 years, they still didn't get any children. At the same time, Rivka's sister Malka openly complains about the too strict religious rules and is in love with the secular Yakov, but a rabbi already engaged her to the Orthodox Yossef. Rivka goes on to examine herself at a gynaecologist, but discovers she is fertile, and that Meir might actually be infertile. Still, the rabbi persuades him to divorce her. At the same time, Malka marries Yossef, but has an affair with Yakov.

Amos Gitai is a talented director with often thought provocative themes about society in Israel. His 1999 film "Kadosh", nominated for a Golden Palm in Cannes, took a critical view at religious fanaticism and was dismissed by some who called it "anti-religious", but they overlooked the fact that he never denies the concept of religion - just the execution of it. By portraying two women, Rivka and Malka, in ultra-Orthodox Jewish community, Gitai showed sensibility and understanding for oppressed people and tried to make them equal, urging reforms and adaptation of religion's traditions who often have too many rules and penetrate into every aspect of life. There's this neat little sequence that embodies that idea in a slightly comical way: it's the one where Yossef and Meir are arguing if preparing tea on Sabbath is allowed or not because it might be considered - cooking. From the exposition, the 6 minute long take in which Meir wakes up in his bed, dresses, prays and wakes up his wife, does the movie establish it's static, minimalistic tone and demanding approach to the ambitious subject, and Yaël Abecassis is simply wonderful as heroine Rivka. Gitai doesn't hesitate to show her and her sister Malka questioning the meaning of some rules, like in the scene where Malka is envying "other" people who watch films, listen to music and drive fast cars, adding that she saw some Orthodox people throw stones at a woman just because she was wearing a short skirt. But the director also showed the positive sides of some Orthodox men, like Meir who actually generally cares and loves Rivka and hesitates to divorce her just because they can't have kids. "Kadosh" is a good film, but it seems the director just kept the suggestive tone too often instead of giving his own concrete thoughts on the subject.