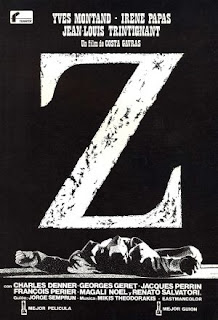 An unnamed country. The dictatorship plans to locate foreign nuclear weapons. Doctor Z is the leader of an opposition party that plans to bring peace and democracy to the country, but the government forbids them to find a building where they could hold their speech. When they finally find a location, the police passively lets troublemakers in until some Vago from his van hits Z on his head by a stick and runs away. Z dies. Vago gets arrested accidentally, but the police and the military sabotage the investigation so that he could be pronounced innocent. The investigator discovers that the murder was ordered by high ranking officials of the regime, so he accuses them. At the trial, they get released of all charges while all the witnesses get mysteriously murdered.

Although its title consists just out of one letter, political (art)-thriller "Z" is not at all an acronym of its possibilities; an excellent film with bravura directing by Costa Gavras who shaped the whole story as a sly allegory on the Greek military junta from '67 to '74, which is why the sole disclaimer is already ironical by stating: "Any resemblance to real events, to persons living or dead, is not accidental. It's DELIBERATE". It is a real film for adults since the plot does not have a real hero but is full of episodic characters (a doctor, a witness, a reporter...) and lives only from observations and intelligent contemplation, whereas it is also slightly overlong, but due to its extremely elaborated details it can be outstandingly presented as a study of injustice, corruption, greed for power and dictatorship: the scenes where the police just passively stands while a hooligan hits the leader of the opposition party, a doctor, and runs away to hide in the mob; the end when all witnesses who were to testify against the regime die from mysterious circumstances, etc. Even the reporter, the host of the news, disappears in the montage and gets replaced, crafting a fascinating style that gets everything right down to a T. "Z" is an extremely stylistic, vibrant, creative and electrifying achievement, superior to a huge majority of dry, stiff art-films, and has some genuine ingenuity of the author which makes it one of the best films of the 20th century, a small jewel.