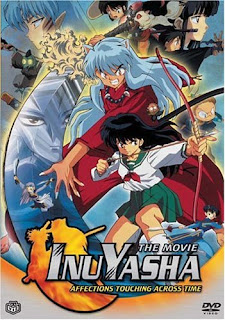 Kagome leaves the modern Tokyo to visit the medieval Japan using a portal in a well. She meets her friend Inuyasha, a half-demon, for whom she made breakfast. But she accidentally stumbles right in the middle of a fight between him and a giant scorpion. Sango and Miroku go to investigate it and find two Chinese witch-women who steal their powers away. They work for the evil demon Menumaru who lures Inuyasha into his cave and steals the energy from his sword, creating a super-demon out of him. Menumaru hypnotizes Kagome and forces her to attack Inuyasha. But Kagome becomes conscious and destroys Menumaru with Inuyasha.

Fantasy anime series "Inuyasha" also has four movies, and the first one among on them was this one, "Inuyasha - Affections Touching Across Time", that is worthy to be a real equivalent of the original. It's not anything new compared to the series, but the syntax of virtuoso action, gentle romance and classic conflicts between good and evil work almost as good as a top-notch product. Those who never heard of "Inuyasha" should watch the series first since this movie starts in medias res and leans a lot towards the already established relations. For instance, it is known that whenever Kagome says "Sit!" the magic will force Inuyasha to fall on the ground. Here he soullessly eats the carefully cooked food she made especially just for him and then reaches for some fast food. That's why she gets so angry that she says "Sit!" six times, making him fall down some two feet under the ground. There's also the sympathetic womanizer Miroku: at first, he saves Sango from a giant scorpion so she wants to thank him, but then he puts his hand on her butt...And she slaps him. At another instance, he meets two Chinese witch-women and spontaneously asks them his classic line: "Will you be mothers of my children?" Rarely was a medieval context, besides the wonderful final song, so evenly "modernised" as in this sweet jewel of anime, the creation of Rumiko Takahashi.