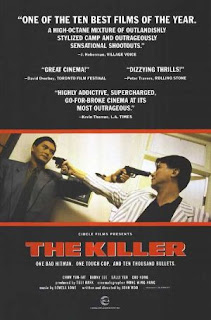 Hong Kong. Jeffrey Chow is an unusual professional assassin who kills only evil people while he gets his assignments in a church. During one assignment, he accidentally wounds singer Jenny who becomes half-blind. Shocked for wounding an innocent person, Jeffrey decides to get enough money for her to pay for an operation that would give her back her sight. But his boss, Wong, refuses to pay him money for the job and even decides to get rid of him. But Jeffrey makes friends with police officer Lee - together they take on the triad. Jeffrey dies while Lee shoots the triad boss Wong.

Even though some regard it as the best achievement by director
John Woo, action movie "The Killer" didn't exactly catch the old action master on right foot. In action sequences exciting and aesthetic, in melodramatic sequences pathetic and acting like a soap opera, "The Killer" is inferior to Woo's later film "Hard Boiled", but it's not bad. Expectantly, the action sequences are the highlight - after an assassin from a boat on the sea, hitman Jeffrey simply drops his gun in the water to get rid of the evidence; he uses a shot to blow up a gas storage behind which his enemy was hiding - and once they start, they don't stop, not even in the church that gets almost completely demolished after the final showdown. It's interesting to note that, despite the fact that the protagonist is the bad guy at first, he is a hitman who only kills evil people, which makes this an ode to honor, friendship and ethics, thus it compensates enough for the maniacal ending in which Jeffrey and Lee "jokingly" call each other Dumbo and Mickey Mouse.