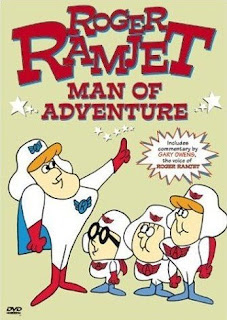 Roger Ramjet is a hero who fights the bad guys with his Proton Energy Pills that give him the strength of 20 atom bombs for a period 20 seconds. He is also the leader of the American Eagle Squadron consisting of four kids: Dee, Yank, Doodle and Dan. General G.I. Brassbottom gives him the assignments, while his enemies include the Solenoid robots, Dr. Evilkisser, secret spy Jacqueline Hyde or Noodles Romanoff and his henchmen. Luckily, the clumsy Ramjet is always there to save the world.

"Roger Ramjet" is one of the most insane parodies of the Cold War era, a wonderful and maximally simple animated cult show revolving around the clumsy hero from the title. A part of the viewers lamented about how it looks "too silly", but even though every episode lasts for only five minutes, the writers managed to "squeeze" just enough content in them to work, whereas by using completely absurd stories, possessed caricature characters, distraught looks on their faces, wacky situations, over-the-top satire, gobsmacked ideas and crude animation (that even spells some lines on the screen) they crafted an absolutely hilarious experience, a howlingly funny show that's so much more comical than other "proper" children's shows like "Tom and Jerry" or "Looney Tunes".

A large part of its charm radiates from the writers' incomprehensible sense for the absurd presented in a "serious" way, which culminates in surreal jokes (in one episode, for instance, Roger uses the help of a talking horse to defeat the bad guys who invaded a ranch. The cowboys are all grateful for his help, but Roger says they should also thank their talking horse. "Talking horse...What talking horse?!", asks one of the cowboys. "Why that one over there!", responds Roger and points towards the horse. But just then the horse acts normally, refuses to talk and instead just howls. The cowboys then all seize the confused Roger and put him in a straight jacket, saying: "Crazy as a Jaybird!") and hysterical gags. In one of the most insane jokes, Romanoff and his gang try to eliminate Roger all day, but he always has luck and narrowly manages to avoid the danger. The highlight is when they sneak behind his back and are about to shoot him with a canon that is only four yards away from him. "We can't miss at this distance!", says Romanoff. But just as they are about to shoot, an armoured truck comes from nowhere and parks right in front of the cannon, making it explode backwards. Some of the dialogues are also quietly hilarious ("Detective Sergeant, Milton C. Sergeant"). Unfortunately, season four already seems to have depleted its inspiration, whereas season five doesn't even have a single good episode. Some of the reoccurring characters are unfunny, as well, such as Ma Ramjet. Maybe it is silly, but overall, it is one of the funniest animated shows of its time.