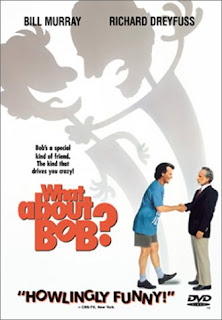 New York. Bob is abnormally multi-phobic; he is afraid to go out on the street, enter an elevator or touch something without a handkerchief, so he works his job inside his apartment. The only time he goes out is when he goes for psychotherapy—but his new therapist, Dr. Leo Marvin, left town for a summer vacation in New Hampshire—so Bob follows him. Leo is self righteous and neglects his family, but his wife and kids, Anna and Sigmund, start to like Bob and teach him something about life, helping him overcome his fears. Leo becomes so jealous he tries to kill Bob, but in the end accepts that he will marry his sister.

"What About Bob?" is a simple and relaxed work by director Frank Oz, who this time chose a politically correct, gentle humor revolving around a story about the upside down concept of the common practice of a psychotherapist entering the private life of a patient, with a few heart warming family moments without turning out preachy, but some of the jokes spoofing psychiatry are so hilarious it's hard not to enjoy its humor. The movie somehow seems close, charming and funny, mostly due to the performance by Bill Murray (in a special edition of a sympathetic stalker) whose character proves that he isn't just a cliche madman suffering from multiple phobias, just like Nicholson's in "As Good as it Gets", teaching psychotherapist Leo (also very comical Richard Dreyfuss) how precious his family moments are. Leo in the end turns more and more to a madman himself, which could split a part of the audience, yet as with his previous comedies, Oz once again crafts a quality, interesting and amusing comedy in every scene, full of humor and dignity, shot around the dreamy locations in Virginia on the Smith Mountain Lake. One of the funniest moments is when Bob is talking with Leo on the phone ("Hallo, Doctor? Hi, how are you? How's the brood?"); Leo, all in dirt, showing up to his surprise birthday party looking like a 'psycho psychiatrist' or some instances of subtle gags, like with Leo's obsession with Sigmund Freud (among others, his son is called Sigmund and his daughter Anna, the name of Freud's daughter).