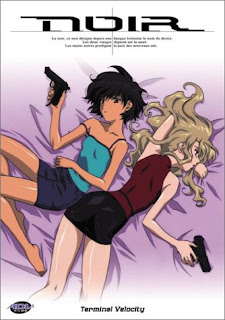 Mireille Bouquet is a French girl working as a hired assassin. One day she gets an e-mail message of the Japanese student Kirika who wants to become her partner. They both lost their memory of the past except for one watch, so they join the group called 'Noir'. Besides that, they are hunted by the mysterious assassins of another group called 'Les Soldates'. Mireille discovers 'Les Soldates' killed her parents whereas 'Noir' is a centuries older group than theirs. When Kirika remembers that she was the assassin of Mireille's parents, she leaves 'Noir'. The suspicious Chloe helps Kirika enter into the official club, but she kills her. Mireille and Kirika kill the boss of 'Les Soldates'.

Thriller series "Noir" offers an ideal inducement for the potentials of the mature anime genre by using all possible means of film noir, yet this time with not such a wondrous and hypnotic effect as one would expect. One of the most subtle ideas was, despite hundreds of murders in the story, no not show a drop of blood in the entire show except for two scenes (!), though the brutality is there, like when Kirika kills an enemy by stabbing sunglasses into his head. Also, from time to time some episodes can be really cynical, like in the one where a father with his kitschy, idealised wife and kids enters their home, only for it to explode in the next scene. The most bizarre scene is this: a girl, member of Sicilian mafia, due to a tradition kills her father with a knife, and he just shouts: "Bravo! Yes! Good job!" Some other director, like Yasunori Urata or Konosuke Uda, could have made a sparkling anime from "Noir", but this way it seems cold, lifeless and stiff. The attractive Mireille would be even more attractive if she wasn't such a lifeless skeleton.