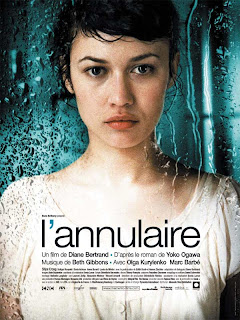 The young Iris works in a lemonade factory. One day her finger is injured when it got stuck on one bottle in the assembly line and she faints when she spots blood. She quits her job and finds a place to stay in a motel at the coast, where sailors work over night. She finds a new job as receptionist in a small laboratory for conservation of items. Her boss flirts with her and they start a relationship. He gives her shoes as a present and admits that previous girls quit their job. In order to finally see his laboratory, Iris decides to conservate herself.

Maybe it's not right to criticize the whole French cinema just for one film, but ever since the 80s the cinema of that country fell into a crisis by producing a lot of existential, but pretentious, sterile and empty movies, and "The Ring Finger" is one genuine example of it. It's story sounds like nonsense and at closer look it really is nonsense. Some movies have poor plots, but compensate with style, yet here director Diane Bertarnd directs the whole film without any strategy, which results in empty scenes of the protagonists just standing there and talking uninspiring lines. Actress Olga Kurylenko is pretty good in the leading role and the whole movie never irritates with something wrong which means that generally one can't complain about it except for the fact that the whole film is simply pointless, a bleak story without a head or a tail. Some could find some deeper meanings and symbols in the story, but except for the two erotic scenes in the middle, there is not much to see in the film.