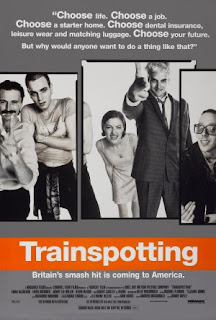 Scotland is in big depression. Mark himself doesn't have a clue why he is a heroine addict or why he hangs out with Spud, James Bond-fan Sick Boy and adult Begbie who thinks drugs are trash and acts like a violent maniac. When Marc decides to quit his addiction after his parents persuade him to do so, he realizes he can't do it. He meets a young girl and spends the night with her, but then hardly sees her while Spud ends up in prison. When Mark falls into a coma after an overdose, he gets hallucinations about his life, wakes up, becomes "clean" and finds a job. When his company involves him into a drug selling business, they earn 16,000 Pounds. Mark steals the money one night and leaves them thinking: "Maybe I found a family!"

Radical, megalomaniac drama that at times crosses all borders and limits, stepping into grotesque and back, surprisingly became the most commercial British film of 1996. "Trainspotting" is a cold film, but it's a bomb, a wild film full of twisted energy and almost dictatorial control that isn't enjoyed, but obediently embraced. In one of the first scenes the anti-hero, Mark, contemplates about all the things he needs to quit his drug addiction, which shows that he can also be sympathetic here and there, while the visualisation of his abstinence crisis and hallucinations is so palpable that it causes nausea. Still, director Danny Boyle and screenwriter John Hodge constantly keep up with the theme of a bored youth without perspective that hates everything in life, even the fact that "Scotland is still under England's command", while the excellent Robert Carlyle is also excellent and abstract as the violent Begbie. The adapted screenplay was nominated for an Oscar and won a BAFTA, crafting a masterpiece that's not for everyone, but will stir up everyone to do something, offering one of the most bizarre scenes of the 90s, the one in which Mark "dives" into a toilet bowl and swims through the water, searching for his drug, the only mean of his delusion.