An American Werewolf in London 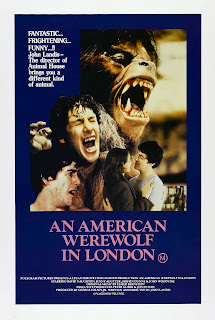 American students David and Jack travel through a forest in England at night until they meet a Werewolf that attacks them. 3 weeks later David wakes up wounded in a London hospital, while Jack is dead. David constantly has nightmares until he meets the rotten ghost of Jack who tells him that he will turn into a Werewolf and advises him to commit suicide. David goes to the apartment of his beloved nurse Alex, but then truly transforms into a Werewolf and kills 6 people, running away from her. In a porn cinema he again transforms and is killed by the police.

This cult classic from the 80s surprises with its "impossible" syncretism of harsh, pure horror and "imploding", pure comedy full of almost childish jokes, all the while offering director John Landis in his top-notch oddball shape. The story is surprisingly clever and inventive: in the opening, David and Jack hitchhike on a truck among the lambs only to a few minutes later stumble upon a secluded pub, 'The Slaughtered Lamb', which already foreshadows their fate; all the songs throughout the film contain the word "moon" it in, the rhythm is achieved through fast editing that at the same time half-censors a few violent scenes while the imagination of the author is very interesting and gives the whole story a surreal touch. A sparkling black fun, especially for the cineasts. The make up won an Oscar and is even today scary and realistic, the jokes 'defy' any conventional rule (especially with a few satirical jabs at the English mentality, such as the scene where David unsuccessfully tries a polite police officer to arrest him, provoking him with such insults: "Shakespeare was French! Prince Charles is a faggot!") while the finale set in a porn cinema and the wacky sequence where a car crash catapults the drivers outside through the windshield is unbelievable and still unmatched in its genre. The only complaint could be aimed at the fact that David's cheerful personality and the Werewolf subtext simply don't blend in, but act just as something that doesn't need any logic, which can be forgiven since otherwise it would have turned out to be a fantasy drama. The ending is surprisingly tragic (but precisely because of that refreshing, avoiding a typical cliche 'happy ending') so a sequel filmmed 16 years later "improved" the story by giving it a happy ending, but also spoiled it at the same time by deducting all meta-movie gags and clever references.