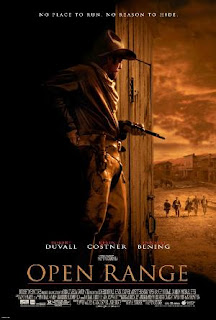 19th century. Boss Spearman is an old cowboy and a free-range cattleman. Charlie, the huge Mose and the teenage Button work for him. One day Mose is attacked in a town by men working for the local tycoon Baxter who puts him in jail. Boss and Charlie pick Mose up and bring him to a nurse, Sue. When they take revenge on Baxter's men who were following them, they return to find Mose killed and Button wounded. They stay in town and start a showdown against Baxter, killing him. Charlie proposes Sue.

Kevin Costner's third movie as a director improved him on some aspects, but also worsened him on others. Unlike his previous films, here the love story is underplayed and thus doesn't fall into the cliche of him playing the irresistible charmer where every woman falls into his arms, whereas the mannerisms were eliminated in favor of a clear and calm mood filled with a few neat details (the way the 4 cattlemen have to sleep under an improvised tent while it's raining all around and on them; Charlie breaks the shotguns of Baxter's men by smashing them on a tree) and crystal clear cinematography with an eye for landscapes. But, alas, the whole movie is somehow unexciting and lax in it's presentation, while the final showdown is full of cliches, thus Costner wasn't quite able to repeat and capture the magic of his debut "Wolves", one of the most beautiful westerns of the 20th century.