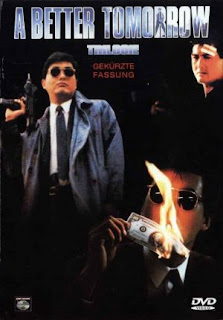 Hong Kong. Sung Ho and his brother Kit are very close, but something is dividing them. Namely, Kit is a successful cop and doesn't know that Ho is actually a member of the mafia and uses his friend Mark to smuggle drugs. After Mark becomes a cripple during an assignment while his father is killed, Ho surrenders to the police. After three years, he gets released from prison and decides to find an honest job, but Kit Kit doesn't even want to hear about him. Shing, the mob boss, uses all methods to obstruct the lives of Mark and Ho to force them to return to him. They are fed up so they steal Shing's incriminating tape. In a showdown, Mark and Shing die, while Kit arrest Ho.

"A Better Tomorrow" was the significant movie and smash international hit by Hong Kong director John Woo, but despite critical acclaim it's a matter of one of his more standard achievements. As always, Woo is a master in orchestrating action sequences, but the drama doesn't lie the best on his shoulders, making his serious "Tomorrow" seem forced and pretentious at moments, like in the sappy scene in which the angry Kit smashes a mirror in the bathroom with his bare hand. At that intent, he only managed in the interesting relationship between the two brothers, one cop another criminal, adding a dose of "romanticized violence". At the same time, the image in which Chow Yun-Fat, Woo's trademark actor, shoots with two guns with both hands became a small action classic, which is one of the reason why "Tomorrow" is still superior than its tedious sequels.