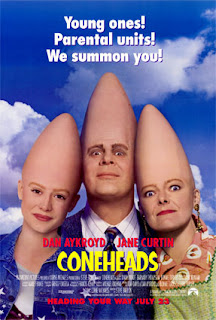 When an alien spacecraft from planet Remulak is shot down over New Jersey, two of its alien passengers, Beldar and Prymaat, get stuck on Earth and decide to blend in with the American society. Even though their characteristically pointy heads stand out substantially, they manage to find work, fake IDs and a home, eventually changing their last name to Conehead. With time, they get a daughter who grows into a "normal" teenager and finds a boyfriend. When the Remulakians return to pick them up, they decide to stay on Earth.

The bizarre alien family 'Coneheads' entertained the TV audience in the popular show "Saturday Night Live", and thus the movie adaptation of them turned out to be one unconventional and interesting achievement, full of completely different takes on the stereotype family life in the US, with a few neat satirical jabs at 'alien' immigrants. But, despite the fact that it was helmed by its creator Dan Aykroyd, the attempt at parody wasn't half as successful as it was expected - many characteristics of the three alien protagonists are more bizarre than they are funny, while the bottom was achieved with the finale that stopped being funny and meddled itself too much with their planet. The biggest virtues are a confident attitude done with much more taste than one could expect so that basically almost every viewer could identify herself or himself with the 'egghead' aliens, as well as a few good jokes, like when Beldar chews a condom because he mistakes it for bubblegum or when he invites his daughter's boyfriend Ronnie to "have a 55 word conversation" with him.