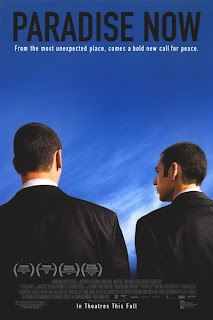 Nablus. Two young Palestinian lads Said and Khaled have lost their job as auto mechanics and generally feel their lives are empty and pointless. So they join a extremist Palestinian organization to perform a suicide attack, hoping to send a message against Israel's occupation. Said also has contact with the French born girl Suha. When the two guys are about to cross the border to Israel, a helicopter shows up and they flee back to Nablus, separating from each other. Still, they reunite and continue with their plan, despite the protests of Suha. Once in Tel Aviv, Khaled changes his mind and returns home, while Said continues and enters a bus.

"Paradise Now" is one of the films that take a different approach towards a difficult subject, a one that's far beyond the cliches the mainstream cinema expects it to be. Director Hany Abu-Assad decides to show only the perspective of the two Palestinian disillusioned youngsters who decide to become suicide bombers, presenting them in a way that's so shockingly humane and full of understanding that it feels as if a brick hits you in the head: ultimately, some have found that take on the long Israeli-Palestinian conflict honest, while others have denounced it as controversial and misleading. Surprisingly, despite some really harsh words towards the Israelis - among others, Said tells how his father was killed by them, how "Israel can't be both the suppressor and the victim at the same time" or how one sly leader of the extremist suicide group talks how "there is no freedom without resistance" - the story is never pro-terrorism since it ends with an open ending that let's the viewers decide if the suicide attack happened or not, whereas it also shows how the two protagonists doubt if this is the right way and hesitate to kill Jews. There is also a lot of philosophical contemplation going on, especially between the girl Suha, who represents the pacifist view and wants to resolve the conflict with a "moral war", and Said who represents the hard-line approach and wants to use violence to resolve it. The movie is so much better directed than most movies coming from that area. Whether some will approve it or not, the movie is there. And it has an artistic touch that makes it really good, despite all, which is why it even won a Golden Globe as best foreign language film.