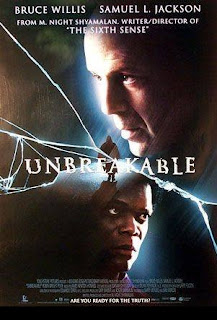 David Dunn is a passenger on a train. Suddenly an accident happens and he is the only survivor in the wreck, and without a scratch on top of it. He returns to his wife Audrey, who works in a hospital, and son. Then he is approached by African American Elijah Price who offers him a bizarre explanation for his strength: there is a balance in the world, which means that for every extreme there is an opposite. Elijah has weak bones, but David is his opposite because he is indestructible, some sort of a superhero. David doesn't believe him at first and returns to his job at the security, but quickly figures it's true. As a hero, he saves two kids from a burglar. Then he discovers that Elijah caused the train wreck and arrests him.

The second movie collaboration between director M. Night Shyamalan and actor Bruce Willis, "Unbreakable" is almost as good as "The 6th Sense", but bizarrely the Oscars and other hyped awards avoided it this time completely. Unlike "Sense", Willis' character here has a better involvement in the story and plays a more self conscious part, proving to be a very fine dramatic actor. The original idea is undoubtedly original: it's the premise that there is a balance in the world, which means that for every extreme there must be an opposite extreme. The two characters which are antipodes of each other was a premise with a lot of possibilities, but Shyamalan once again proved his main flaw, namely the poor development and exploitation of a thin idea. This way, the story again seems underdeveloped since the two protagonists didn't know what to do with their acquisition. Shyamalan once again executes the film with a fine, subtle style, yet his waste of the premise and the silly involvement of a superhero idea bring "Unbreakable" down.