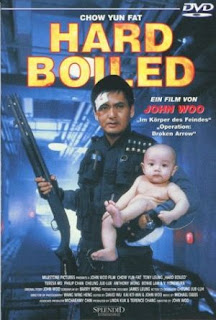 Hong Kong. Police officer Yuen, nicknamed Tequila, tries to expose criminals who smuggle arms. During a raid, his partner is killed which affects him deeply. The boss of the smugglers is the so called Uncle Hoi, but he gets killed by his pupils Johnny and Alan who take over his place. Yuen attacks them in another raid and discovers Alan is actually an undercover cop. He and Alan discover the weapons are hidden under a hospital, so they call the police to surround the building. After a long siege, Johnny kills Alan, but Yuen kills him.

"Hard Boiled", the last Hong Kong film by director John Woo before he left to work in America, is a truly quality made action thriller and—according to many—one of his 2-3 best films. The first half takes some time to warm up, since it takes time to set up the plot that will trigger action sequences, but the second half of this cult film is virtuoso directed: the almost 40 minutes long finale of the police siege of a hospital in which criminals barricaded themselves where they were hiding their weapons (!) offers more action than three Schwarzenegger movies put together. The highlight is the 3 minute long scene where police officers Yuen and Alan run through the hospital corridors and shoot at the gangsters, enter an elevator and then attack more criminals, all done in one take, as well as the bizarre moment where Yuen holds a baby in his arms and shoots at the enemies.

Woo rises to the occasion: almost all action sequences are meticulously choreographed, enriched with several cinematic techniques, from camera drives (as criminals shoot from the hospital window at the vehicle, the camera approaches the flame) up to aesthetic uses of blue colors and wide lenses, whereas he also copes very well with melancholy and ethics, which makes him superior to other action garbage. The concept of a secret police agent who infiltrated a criminal gang and spies on them has been done several times, yet rarely with such audacity and explosive scope. Several details are exquisite (officer Yuen arrives at the crime scene, the library, where a man was shot, and spots a clean rectangle on the table, which was mysteriously not soaked by blood, so he browses through the book shelves, until he finds a blood-stained book that fits, and which contains a gun instead of paper in it), while the level of suspense just keeps growing until the finale, ultimately ending in an epic spectacle, an "action Iliad".