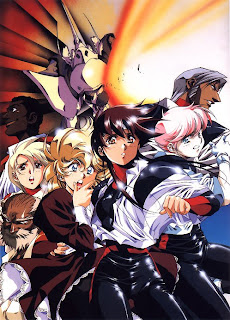 Sometime, somewhere: the dashing but cynical Tita wakes up in her bed, ready for a new day as captain of a spaceship that captures exotic creatures of some planet. One day, while shopping, she rescues a girl from the army. The girl is Elyse, the daughter of a scientist who was killed because he discovered a mighty weapon, which commander Guizel wants to use to gain control over the planet: Tita has compassion for her since she herself lost her father when she was little. Together they take a bath and become friends, running away from the military. Although it's now an "enemy" of the country, Tita's organization still manages to save Elyse and destroy the weapon.

Anime - those are esoteric animated achievements from Japan often containing characters with big eyes and unusual heads who, thanks to their unexplainable charm and unreachable movements and charisma, overshadow a lot of lympathic creations from other medias. Even 1 episode OVA "Plastic Little" would have problems if it wasn't conceptualized in Japan, because it contains a few violent-bloody scenes and swearing that would otherwise threaten it's sympathy, but this way, as an anime, that blends childish cartoon and adult story in one, the authors crafted an interesting science-fiction action melodrama with a happy ending, slightly too serious and crammed with too much "fan service" by Satoshi Urushihara, though, while again there were a few unusual moments added, this time by depicting the naked, half-spoiled Tita how she is taking a bath or when she wakes up lying wounded in a medicine bed with bare breasts, spots her colleague pilot Nichol sleeping by her side and wants to hit him because her first thought is that he is a pervert, but then changes her mind because she realizes that he was worried about her and monitored her the whole night.