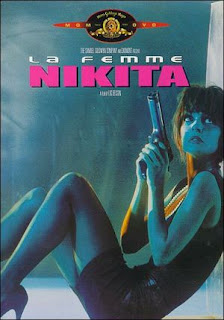 Nikita (19) is a nihilistic heroin addict who together with her friends robs a pharmacy in order to get some drugs. The police surrounds the building and kills everyone except Nikita. She is sentenced to a life in prison. After she gets some medicaments, she wakes up in one room where Bob, an agent of a secret service agency, and offers her two choices: death or work as a hired assassin. Nikita chooses the latter and after long training starts performing the assassins. But after she finds a boyfriend and love she gets sickened by violence and runs away from the agency.

Around director Luc Besson various conflicting opinions clashed with one another: for some, he was just an irritating, sloppy author full of mannerisms, while for the others he was an artist full of aesthetic touch and style. His 4th film, "Nikita", that gained a huge commercial success in France and was even nominated for a Golden Globe as best foreign language film, is definitely inferior to his later movie about an assassin, "Leon", due to the irritating performance by actress Anne Parillaud, but as a whole it's not a bad film. The story at first shows Nikita as a brutal antagonist without heart (she stabs the hand of a cop with a pen; puts a living mouse in the box of a computer expert...) but starts to change confronted with the job of a killer so that in the quiet and understated open ending she actually becomes a positive character who rejects violence and awakens her feelings. Besson's direction is sketchy, but he again has a wonderful visual style.