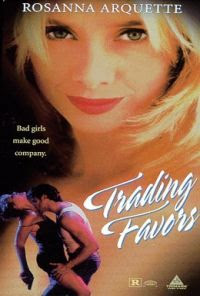 The 18-year old Lincoln lives in his boring home with uninteresting parents, while his brother committed suicide. He still keeps his pictures in his photo album. One evening, his "friends" Andy and Bobby, who constantly mock him, escort him to a shop. There Lincoln meets a mysterious blond, Alex, and asks her to buy them some beer, but she even joins them, double crosses them and borrows their car, taking Lincoln with her. Alex seduces employees and one by one robs their stores. In a motel she becomes intimate with Lincoln and tells him about her sad childhood and her crime files. She brings him to her home, but there her violent ex-lover Ted catches them. He gets shot by a cop in a store, and Alex also gets killed, while Lincoln returns home.

Sufficient adventure crime drama "Trading Favors" doesn't offer some extraordinary situations or imaginative execution of the story, and quite frankly it's uninteresting and the only good ingredient it has is nice cinematography and a effective appearance of actress Rosanna Arquette. The director Sondra Locke and screenwriter Timothy Albaugh obviously copied the concept about a bored and secluded hero whose live gets stirred up by a wild woman who brings some adventure into his life from Demme's "Something Wild" from '86, but there the mysterious woman had some dynamic energy, while here the result is more than heavily overstretched. Stripped from almost any kind of directorial skill, humor, emotions or suspense, the whole film turned just into one of those inerts film that seem that they were made just because the authors wanted to make anything, but didn't have inspiration. Once again, Arquette is good, but with such a pale film that has almost nothing to show, she doesn't have anything else to do but aimlessly act, merge with the empty walk or talk average dialogues, and at least three scenes, among them the one where she is kissing with Lincoln in a store while a clerk asks what she is doing and she replies with: "I'm making out with my boyfriend", are deeply embarrassing.