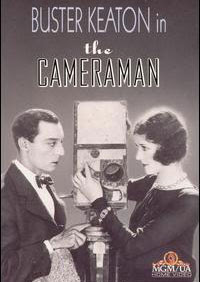 Luke Shannon is a street photographer. When he falls in love with Sally who works in an newsreel department, he decides to get a job as a cameraman in order to be with her: he sells his photo camera and buys a movie camera. But he doesn't have much luck with his attempts to capture an interesting event: he can't find a fire, a baseball game is cancelled and his camera gets damaged. He goes out on a date with Sally and the two of them enter a public pool. When he gets an assignment to film a celebration in Chinatown he gets preoccupied with a little monkey while some Chinese gangsters mistake his camera for a machine gun and start a war. When Luke sends the film to the agency, together with his shots of him saving Sally in the sea, he becomes famous. She falls in love with him.

One of the tamer comedies from the famous "comedian with the stone face" Buster Keaton, "The Cameraman" still won't disappoint his fans. The objection to this comedy lies in the fact that the first 30 minutes are stiff and provide a tiresome start, whereas generally speaking the film as a whole seems surpassingly sustained in it's humor than many of his hilarious classics, which somehow attenuates the impression. It's a light story, but some gags are still little jewels non-the-less, for instance the one when his alter ego Luke is pushing with a man in a very narrow dressing room where by taking off his undershirt he is at the same time dressing it on him or when he looses his bathing suit in the public swimming pool and manages by stealing a costume of some lady. Among the best ingredients of this interesting film are experimental, meta film scenes that play with the possibilities of the camera, like the scenes that go forwards and backwards in time, that could have developed and influenced a lot on the visual style of cinema.