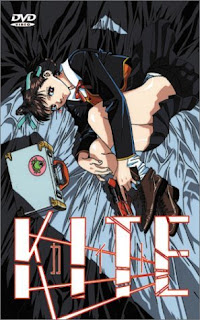 A famous show-master enters a elevator with a girl. She kills him and runs away, while an old lady gets a heart attack. The girl is the high school student Sawa who works as an assassin for the corrupt commissioner Akai who sleeps with her. Her next assignment leads her to a toilet where she kills an famous action movie actor, but his bodyguards wound her. When Sawa meets a "colleague", the teenage Oburio, she realizes that Akai was actually the one who killed her parents when she was just a kid, so they decide to leave their murderous job. But Akai catches them in a trap and rapes Sawa in front of Oburi. The next morning Oburi is gone and Sawa kills Akai. One kid shoots Oburi.

The fame built around the genre of anime was due to the fact that the Western audience got for the first time familiar with the world of realistic animated films for adults without the trashy tone of some other products. Yet, at some examples even animes tend to go overboard, among them "Kite", a vicious animated thriller filled with negative energy and dread that even shows slightly controversial sequences of rape and intercourse scenes that are for some reason realized almost unbearably disgusting and grotesque. The problem in this 60-minute weak film are also Yasuomi Umetsu's cold directing skills that display explicit violence that reaches almost the splatter level, which places him dangerously close to trash, and the ugly animation. The controversial story about a under aged girl assassin, Sawa, wasn't handled with right measure, while only the quiet moments manage to impress and one spectacular action sequence in which the heroine and a bodyguard are falling from a building and shooting at each other until they slam on a car - it wasn't said for nothing that one has to have nerves of steel for "Kite". But there's a drastic shortage of story, psychology, deeper layers or any kind of style except for the darkly-cold one. Sawa is supposed to be a high school girl, but her class or friends are never shown. Just one of the many losses of this film that only at first glance seems to offer some potential quality.