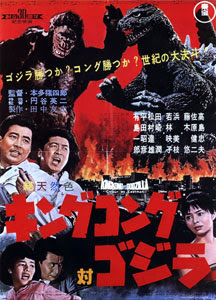 Japan. A giant iceberg in which Godzilla was trapped melted near an Arctic base, freeing the giant monster that takes course towards Tokyo. At the same time, Mr. Tako, head of Pacific Pharmaceuticals, orders his employees Sakurai and Kinsaburo to go to the Pacific island Faro and capture the giant ape King Kong in order to boost his ratings. They drug Kong with red berry juice and transport him on a platform on a ship, but he wakes up and swims to Japan's shore. When the two monsters finally meet they start a fierce fight. Godzilla is stronger at first, but Kong gets his strength from thunder and strikes back. Both of them fall of a cliff and swim away.

"King Kong vs. Godzilla" is the third film featuring the cult monster Godzilla and, just as with virtually every addition to the long trash serial, it's just a silly film whose sense is hard to figure out, except for entertaining the wider audience who wants to turn off their brains and enjoys mindless entertainment. Practically every (human) character is a throw away puppet that has as much charisma or charm as any given truck that drives through one of the roads during the running time of the film, if we disregard a couple of cute satirical scenes in which the greedy Mr. Tako cheers for "his" monster, King Kong, and hopes it gets more publicity in TV, the dialogues are stupid, the dramatic elements are just used for dumbing down the audience while even the key ingredient, the special effects, fail to impress since it's obvious to everyone that Kong and Godzilla are just two guys in cheap rubber suits fighting amongst inch high tanks, buildings and other kid's toys mock-up. The sequence where a "giant" live octopus attacks a house on Tora island is laughable, more suited to the franchise of Ed Wood, and unintentionally funny moments can be found everywhere, most noticeable in the scene where helicopters attach King Kong with wires and transport him through the air as if he is a puppet, and then drop him from a hill right into Godzilla. Sadly, it really seems the characters are all in the way of the basic formula of the whole film, which is "monsters meet, monsters fight, the end".