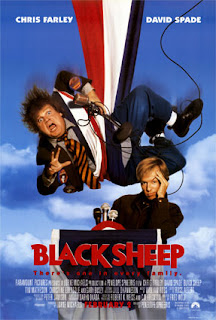 Popular politician Al Donnelly has good chances to become a governor. His clumsy, overweight brother Mike wants to give him all the support he can, but due to his clumsiness he is of more use to Al's competition, who is also a candidate for the governor. That's why Al gives his assistant Steve the assignment to keep Mike off the political view and off trouble for some time, somewhere in a secluded cottage in nature. Still, when Al looses on the election, Mike discovers the votes were manipulated, causing his brother to win in the end.

Poorly known comedy without much intelligent gags or intelligent ways to present dumb gags, "Black Sheep" is a very thin film whose only ingredients - forceful slapstick and annoying "kicking and screaming" physical comedy - quickly turn lame and sizzle off into nothingness somewhere near the end. A few neat gags, like the tipping of the cottage and the inhabitants in it, enters the territory of a simple children's fun, but since it's consists out of physical accidents and dumb stunts it can only please the very, very low expectations of the audience. Tim Matheson in the serious role of the politician Al is actually good and doesn't blend in with the rest of this waste of time, and the comic duo of the overweight Chris Farley and thin David Spade actually has some resemblance to the legendary Laurel and Hardy, except that they would have never been so vulgar and violent, even in their most unambitious movies. Farley isn't particularly funny in this, but he and Spade had some chemistry and it would have been interesting to see what they could have done with some better screenplay, instead of "Black Sheep", one of those silly dumb comedies that try to earn quick money with coaxing the sloppy side of the audience, but once they fail at the box office, they really don't have any reason to exist.